There are various efforts ongoing to collect and process cow manure and process it via digesters to produce bio-gas (https://www.epa.gov/agstar/anaerobic-digestion-right-your-farm.  While admirable, this does not address the fact that bovine each emit 200-1000 liters of gas every day from burps and flatulence.  This may not be a lot per cow, but assuming an average of 500 liters per cow per day, it adds up to almost 7.5 trillion cubic feet of gas (3.6 trillion cubic feet of methane) per year from 1.4 billion cows world-wide.

While the concept of collecting cow flatulence may seem excessive, particularly as seen in  Figure 6 below, nations that depend on cattle-related industries are hard-pressed to find solutions because methane is many times worse (estimated at between 30-70 times depending on source) for the environment then CO2.

The image below is from a study conducted by the government of Argentina to collect cow flatulence via back-packs.  While intriguing, this concept may be impractical on an individual cow basis in the industrialized world where labor costs are high. 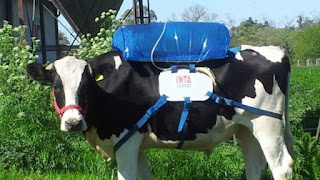 The idea of collecting the bovine off-gas though is intriguing and may deserve consideration, particularly if the cattle are tightly consolidated. 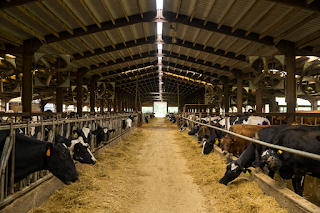 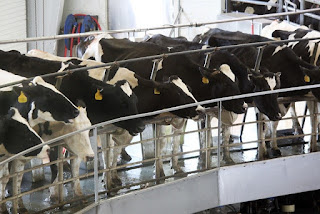 An example of a consolidated area is the dairy farm shown in Figure 7a & 7b, where cattle feed, drink and are milked under sheds.  While the average dairy farm has a few hundred of cattle, the largest dairy farm has over 30,000 head.  Assuming a farm with at least 5,000 head, and if “all” the gas excreted from each cow is collected, then the sheds could collect up to 250,000 liters or 8828 cubic feet per day or 3.2 million cubic feet per year.  This is important because unlike flared gas, where the gas is converted to CO2, the natural gas excreted by the bovine is many times worse.

Considering that there are over 9.5 million dairy cows in the USA alone , that corresponds to 64 billion cubic feet per year of vented natural gas.

A particularly interesting trend, observed by the USDA from 1996 to 2006, was that the number of overall farms fell and the number of head per farm rose over that period.

Thus, a commercially viable solution, either stand-alone or in conjunction with gas processing from the manure digesters, could result in significant environmental benefit.

The authors admit, that this particular opportunity is potentially the most difficult to address, but there is on-going research and development at various universities which could lend itself to a commercially viable solution; thus, it should not be discounted. 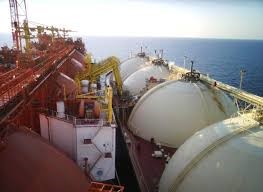 Deep-Dive into Offshore Flared and Stranded Gas While Cya NH3 intends to develop a solution for each of the three opportunities, we are the furthest ahead with a solution for off-shore flared and stranded gas.   This page therefore focuses on flared and stranded gas from off-shore developments. Data is provided in a combination of Field (English Imperial) and Metric units following regional industry conventions.   For example, Field units tend to be preferred in the Gulf of Mexico and West Africa, while Metric is the norm in Brazil. General As discussed earlier, the de-facto solution for gas monetization has been the following in preferential order. ·        Collect and sell gas to local consumers, ideally transmitted via pipe-lines.   ·        If the distance to the consumer is excessive (field and project specific but notionally a 1000 miles), consider conversion of the gas to liquified natural gas (i.e., LNG).   Currently for this solution to be economical, typically any new
Read more